What is a kaomoji? (≧∇≦)

Very present on social networks, emoticons and emojis occupy a large place in today's communication, we all use them! This strong presence is explained by the meaning they bring to your text messages. These emoticons are an excellent way to convey positive emotions, negative emotions or anything else, to better testify your state of mind.
This is the case of the kaomoji which is a style of emoticon popularized by the Japanese forming thus, the expression of a face. That's why they are also called Japanese emoticons. Not to be confused with smileys which are easier to write :-)

Happy emotions are very popular in the kaomoji universe. Cute and kawai, there are so many that it's hard to list them all here! They include special characters like stars, hearts and flowers. Copy them to embellish your messages of joy.

This category includes all the kaomojis that represent emotions that are neither happy nor sad, simply neutral emotions ?_?. Therefore, it gathers many ways to add a touch of originality to your textual creations.

If your mood is one of melancholy and sadness, then you will love this collection of sad kaomojis. Discontent and anger can be easily represented with the special characters ? and ??... Even fatigue with zzZZ!

Daily life activities are very represented with emojis. So why not mix them up and add a little color to your kaomojis? It's possible and totally fun.

The secret to creating a cool emoticon is to use the codes of smileys: the face with ( and ), the eyes with the characters - or ?, the smile with ? or even ?. This way, your kaomoji speaks and everyone loves it!

Animals are so cute, and even cuter in kaomojis. The dog with those little legs ? ?, the cat with his pointy ears /? ?\ or the bear and his big snout ?. Many more animals by browsing below.

All other original kaomoji that do not fit into the other categories. Firearms ??????? and magic wands ????? and other fascinating symbols, musical songs ?-*¨*-.¸¸? and various funny faces.

You can copy & paste kaomojis into the field below and combine them to create new ones.

How to use the special symbols

Special characters can be displayed through the keyboard by pressing the Alt key: 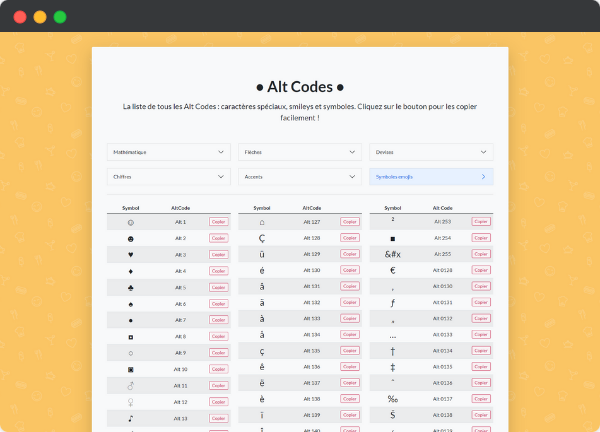 How to create a new kaomoji?

Many of the characters used to create a kaomoji are not accessible from the keyboard. Alt Codes are the solution to all these problems with Oh My Code!

Where do kaomojis come from? ₍⋂⑅⋂₎

There are several sources that contradict each other on the origin of kaomoji, most of which believe that it is typing mistakes. Others believe it was Scott E. Fahlman, a computer science researcher at Carnegie-Mellon University, posted a message on a forum at his school on September 19, 1982, proposing the use of characters. Thereafter, there was a real development of digital technology, computers and the web creating many derivatives including kaomoji. Thus, it is difficult to give a precise origin of kaomoji.

Notwithstanding, it has been found traces of use on the Japanese net by ASCII-net which became ASCII art.

What is ASCII? It is a computer standard giving a character table making it easy to draw with a text editor. It is well after this discovery that the kaomoji has spread in Japan and then in the world through the popularization on the Internet and manga in the years 2000.
This emotional way of communicating by message has an important place in Japanese culture and is the subject of much research in the creation of video games. Whether in Japan or in the rest of the world, kaomoji represent the best way to express one's emotions!

What should we understand about a kaomoji? U^ｪ^U

Kaomoji actually means « face in characters » it is a set of characters;It is a set of special characters inspired by the expressions of manga characters to show our feelings such as love, joy, sadness, anger, etc. Better yet, these characters are similar to what we usually find in our favorite mangas.
The main principle is to allow the speaker to read without having to turn the head. It should be noted that these characters are easily accessible on AZERTY and QWERTY keyboards. Much cuter and more expressive than other characters, kaomojis allow you to better express your thoughts, represent animals and many other things.

To create a kaomoji, it is very simple. It consists of parentheses, asterisks, dashes... These elements express the limitation of the face, the eyes and the mouth. Others use braces instead of parentheses to delimit the face, special characters or dashes replaced by dots to show a cute mouth. The apostrophe, double apostrophe and semicolon are used to express embarrassment of choice or fear. Others use three slashes to express the same feelings. The kaomoji offers a variety of uses to express our feelings.

A few years ago we had to copy characters to express our feelings, today kaomojis, even the most complicated ones are accessible thanks to the list above.
The use of kaomojis on Windows 10 and Mac is possible à through the combination of keyboard keys. In short, it's a universal language, no matter what country you live in!